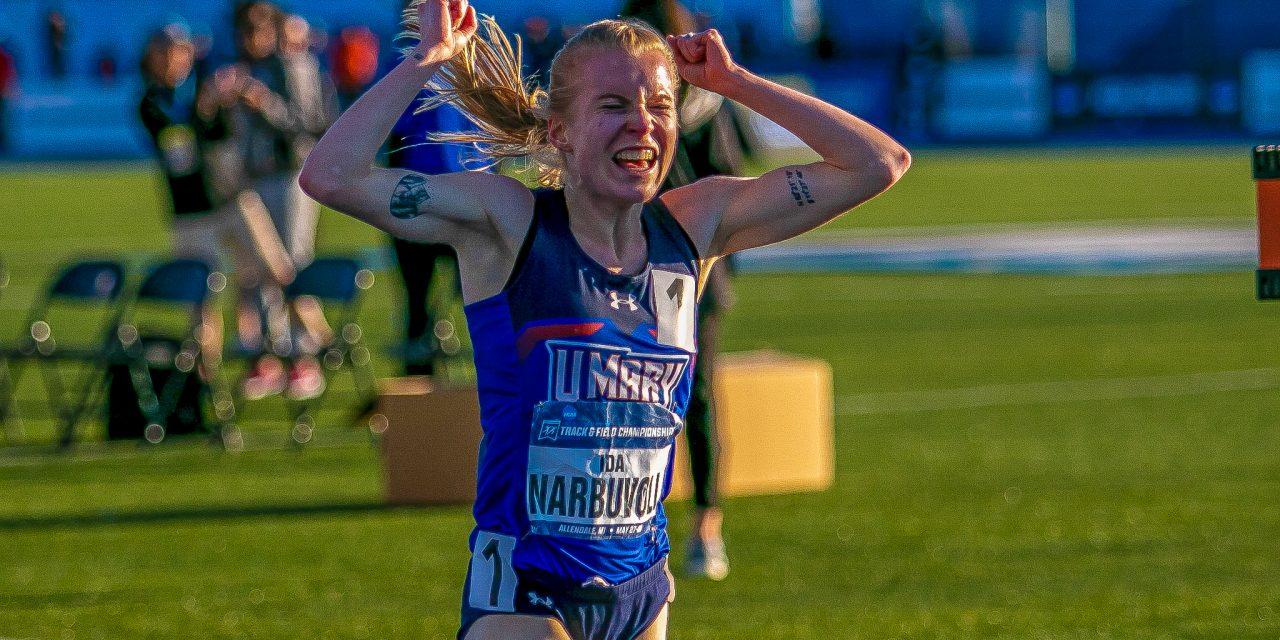 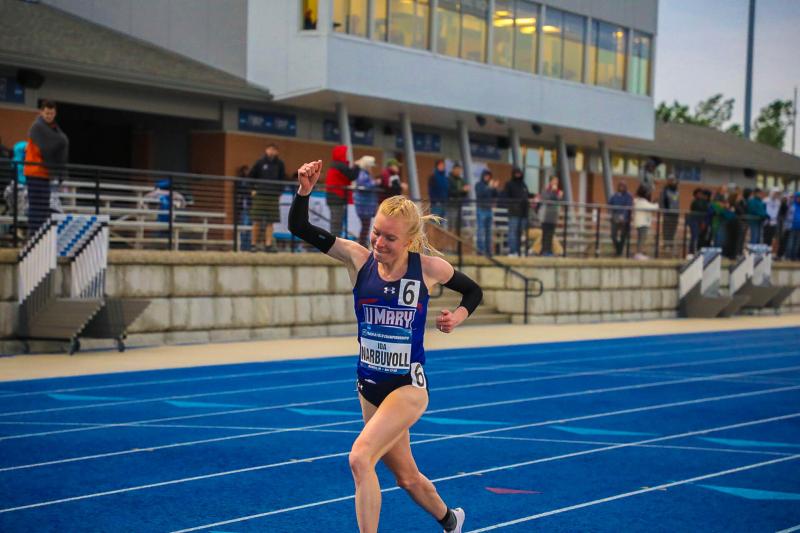 NEW ORLEANS – After rampaging past the competition and crushing numerous records on her way to winning a pair of national championships, University of Mary scholar-athlete Ida Narbovoll was honored as the 2021 NCAA Division II Women’s Outdoor Track Athlete of the Year by the US Track & Field and Cross Country Coaches Association. 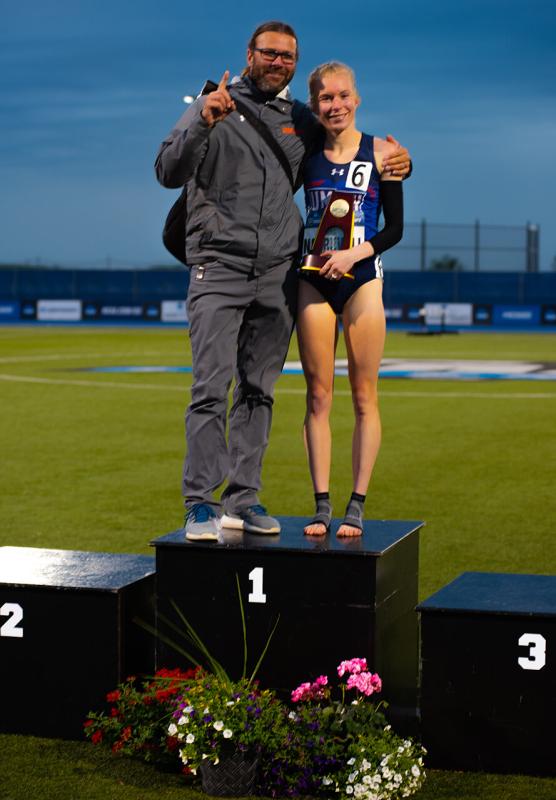 “It is such an honor for Ida to receive this award and I cannot think of a more deserving person to receive this recognition,” said Marauders Head Coach Dennis Newell. “Every head coach in NCAA Division II votes on this award. The respect Ida has earned for her efforts this season makes this honor very special.”

In her final two collegiate races last weekend, Narbuvoll decimated the field to win the two longest races at the NCAA championships.

The 9-time All-American opened the national championships with a commanding win in the 10K, crossing the finish line over 29 seconds ahead of her closest competitor.

Amazingly she had an even better performance in store for the last individual race of the championships. Leading from the opening gun of the 5K, Narbuvoll immediately separated herself from the pack and consistently kept increasing her lead lap after lap in an otherworldly performance. Her winning time of 15:37.50 shattered a 36-year-old meet record by more than 20 seconds while winning the event by more than 13 seconds. Her time in the 5K is also the second-best ever recorded in Division II history. 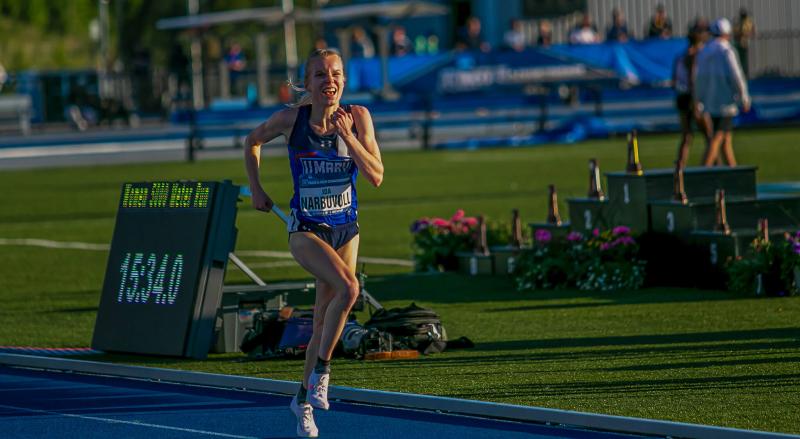 Here is the statement from the USTFCCCA announcing Narbuvoll as the NCAA Division II Track Athlete of the Year: “Narbuvoll, who hails from Narbuvoll, Norway, was named the National Women’s Track Athlete of the Year. Dominant doesn’t begin to describe Narbuvoll’s season, as she went undefeated – a perfect 8-0 record that included a 5000-10,000 double at the 2021 NCAA Division II Outdoor Track & Field Championships. It was in the 5000 in Allendale, Michigan, where Narbuvoll laid waste to a 36-year-old meet record and clocked a winning time of 15:37.50, which smashed the previous all-time best by more than 20 seconds. Just a few weeks earlier at the NSIC Outdoor Championships, Narbuvoll completed the 1500-5000-10,000 triple for 30 points and helped send U-Mary to the team title in Duluth, Minnesota.”

Narbuvoll becomes the third UMary scholar-athlete to earn USTFCCCA Athlete of the Year honors and the program’s first in track. Jennifer Agnew (2013) and Alexis Zeis (2015) both earned USTFCCCA honors in cross county. 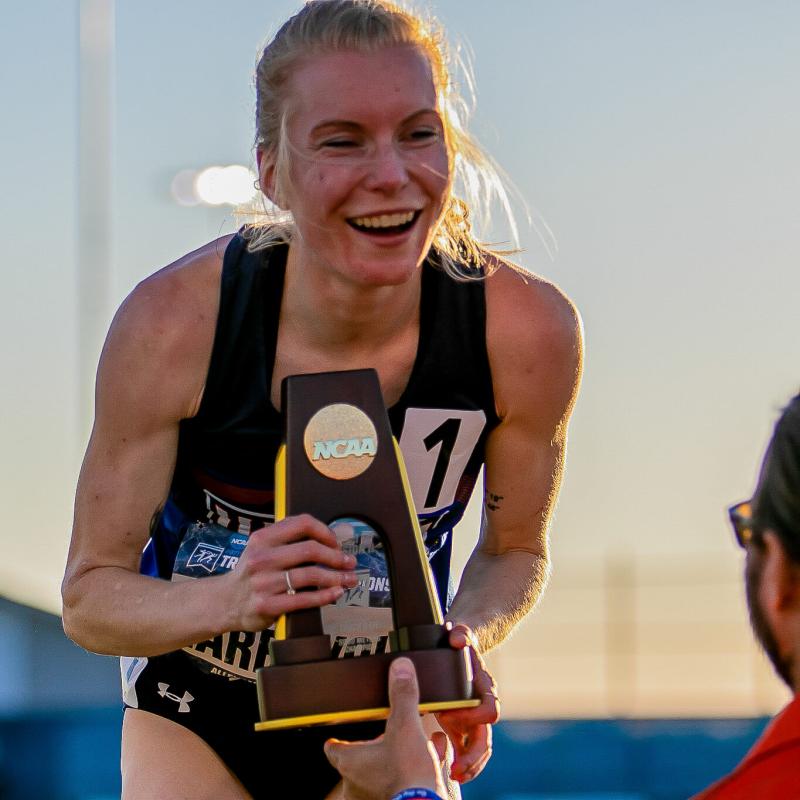 Narbuvoll is also the first UMary scholar-athlete to win a pair of individual event NCAA championships in the same meet. Melissa Agnew won a pair of titles at the 2012 NCAA indoor championships, capturing the mile run and racing on the Distance Medley Relay national championship team.

Additionally, Narbuvoll is the Marauders 7th NCAA champion and the fourth UMary scholar-athlete to win an individual title. Narbuvoll, Alexis Zeis and Melissa Agnew are the only three to win multiple titles.