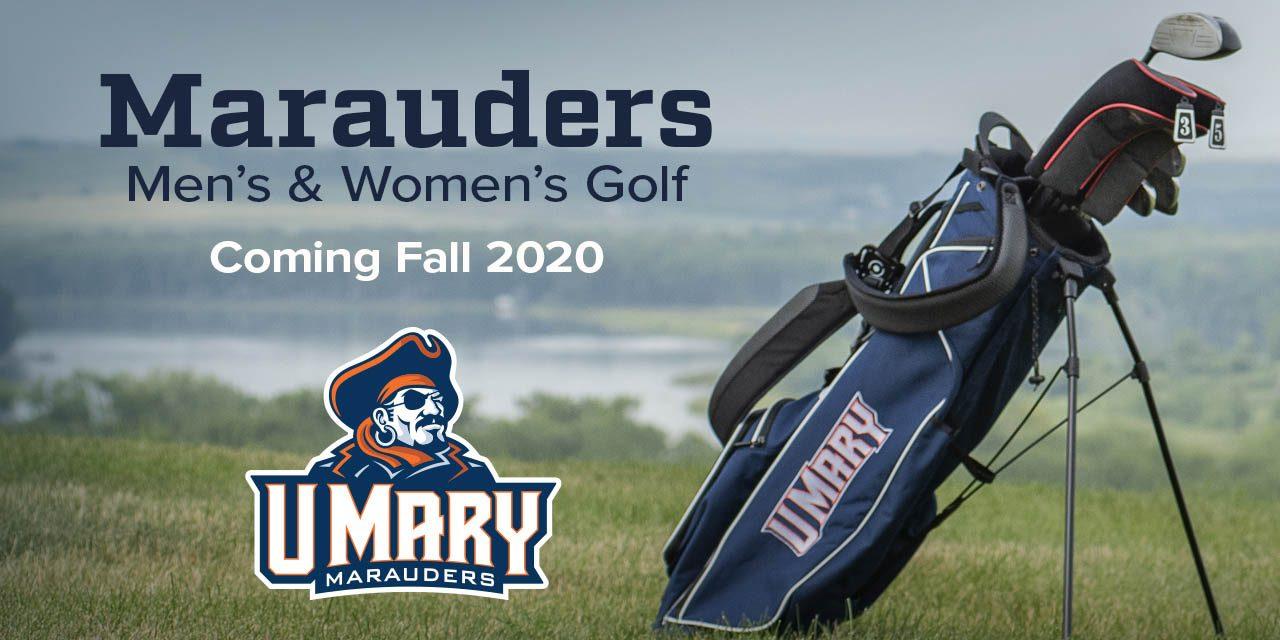 BISMARCK, ND— The University of Mary is teeing off on another sport — golf. The University is proud to announce the addition of men’s and women’s golf to its extensive athletics program beginning the 2020 fall semester.

Scholar-athletes interested in pursuing a degree at the University of Mary now have 18 varsity sports to choose from with the addition of golf.

“By including golf in our program, it gives the University of Mary one of the most comprehensive athletic departments in the Northern Sun Intercollegiate Conference (NSIC),” commented University of Mary Athletic Director, Dale Lennon, who will further discuss the exciting news and answer questions from the media at the Marauders Athletic Luncheon Friday, December 20, 2019, that starts at 11:45 a.m. in Chick’s Place on campus. “UMary is now one of only three schools, along with Augustana University and Minnesota State University, to have the NSIC’s full complement of sports. The addition of men’s and women’s golf is part of our new Greatness through Virtue strategic planannounced earlier this year, which calls for athletic department expansion and allows for the whole character development of the scholar-athlete at the University of Mary.”

Each Marauders golf team will roster between 8 and 12 scholar-athletes. The season consists of a fall schedule and spring schedule with a conference championship in late April. Prior to the conference championship, each NSIC program must have competed in a minimum of six invitational tournaments to be eligible for post-season competition.

“The NSIC is excited to have the University of Mary add men’s and women’s golf to its athletic offering,” stated NSIC Commissioner Erin Lind. “The addition will help enhance the student-athlete experience during the season and at the NSIC Championships. We look forward to having the Marauders be a part of NSIC golf.”

With a full NSIC schedule, the University of Mary will have access to some of the top golf courses in the Upper Midwest.

A national survey done by the United States Golf Association ranks North Dakota as the state with the most golfers and golf courses per capita. The North Dakota High School Activities Association (NDHSAA) has 196 boys’ and girls’ teams competing in the 2019-2020 school year.

Just as the popularity of golf in North Dakota is unquestioned, its growth at all levels remains robust and continues to climb in the Capital City. According to Bismarck Parks and Recreation, in Bismarck alone for 2019, despite a shorter season opening and virtually a non-existent month of playing in October, 37,405 rounds of golf were teed up at its three public courses. Junior golf lessons in Bismarck also jumped to nearly 700.

“We will have the capabilities to recruit on a national basis,” added Lennon. “However, the addition of the golf program at UMary provides local athletes an incredible opportunity to continue playing golf at the collegiate level without having to leave the region. Bismarck-Mandan is a very golf-friendly community with seven golf courses. I believe we have the potential to be competitive early with many area golfers leading the charge. Golf at the University of Mary just makes sense.”

Soon, Lennon hopes to have a coaching staff in place and all the program’s operational details finalized.