Theater production can be purchased on Amazon.com 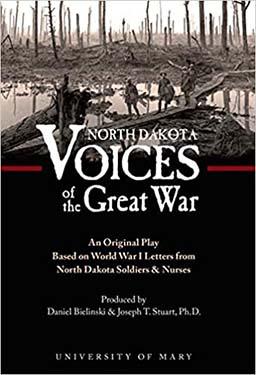 BISMARCK, ND — Nearly two years ago, the University of Mary debuted its original play “North Dakota Voices of the Great War,” based on approximately 1,400 letters written by North Dakota soldiers and nurses who fought in World War I and cared for the wounded and dying either abroad or at home.

This original play is a collaboration between the history and theater programs at the University of Mary. History students researched the World War I Scrapbooks collection at the North Dakota State Archives consisting of four volumes. These letters appeared in newspapers around the state from August 1918 through February 1919.

“Building on these letters, we created an original theatrical production, adding music and poetry from the Great War and improvising dramatic scenes based on the real letters,” said Joseph Stuart, PhD, associate professor of history at the University of Mary, and who co-produced the play along with Daniel Bielinski, the director of the University of Mary Theater Department. “The collaboration between the theater and history students was beautiful to witness, and we believe they created a show with a very personal meaning for North Dakota.”

The original “North Dakota Voices of the Great War” directed by Bielinski and performed by approximately 40 of his cast and crew members, was approximately 75 minutes in length and launched to sellout crowds all three nights at Bismarck’s Belle Mehus Auditorium in 2018.

“I had been excited by Dr. Stuart’s reader’s theater productions at the Heritage Center, and I thought it would translate well into a larger scale, dramatic production,” said Bielinski. “The production was a very moving experience for our North Dakota audiences, and we decided that it would be worthwhile to get it published and preserve the work we and the students had done on the project. It’s a powerful and dramatic way to preserve and celebrate history. Our students poured their hearts into the production, and it will be a rewarding experience to see their work preserved in such a way. High schools and colleges across ND will have the chance to put on this production in years to come.”

Some even thought it would be “the war to end all wars.” But as Stuart points out, it did the opposite and led to the Russian Revolution and Civil War, the Greco-Turkish War, and the Finnish Civil War. Two decades later it brought on World War II and the Cold War, which in turn precipitated conflicts such as the Korean and Vietnam Wars. At the very least, many hoped for lessons learned from the Great War. During that time, everyone was also fighting the Spanish Flu, also known as the 1918 flu pandemic. But even in today’s world, history repeated itself with the COVID-19 virus from China. In one of the passages from the play, a nurse references the horror of the pandemic. 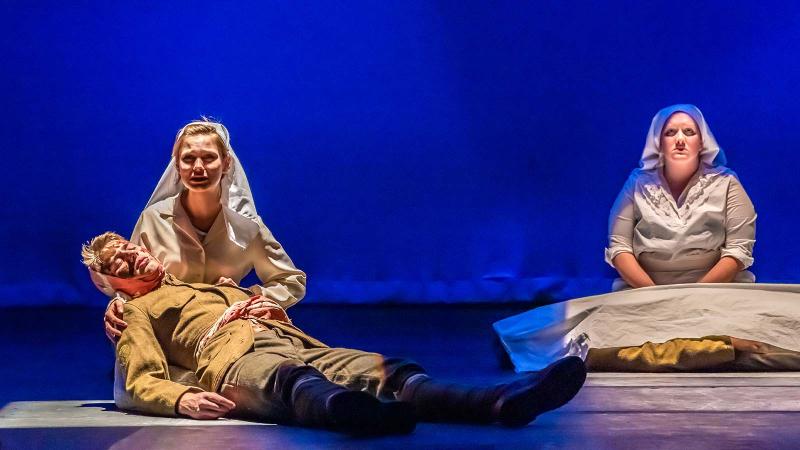 “We had every form of infections and contagious disease in that ward with only curtains separating each case,” said the North Dakota nurse. “The influenza epidemic of 1918 was a never-to-be-forgotten experience. In our camp, I believe there were nearly five thousand cots, row on row, head to foot, all filled with boys hit by the flu. Five of our nurses died, too.”

This original play was made possible through the generous support of the Dakota West Arts Council, University of Mary, and Humanities North Dakota — a nonprofit, independent state partner of the National Endowment of the Humanities.

The 58-page book is colorfully illustrated and a direct link to purchase “North Dakota Voices of the Great War” can be found here: https://www.amazon.com/dp/1734882603?ref=myi_title_dp.