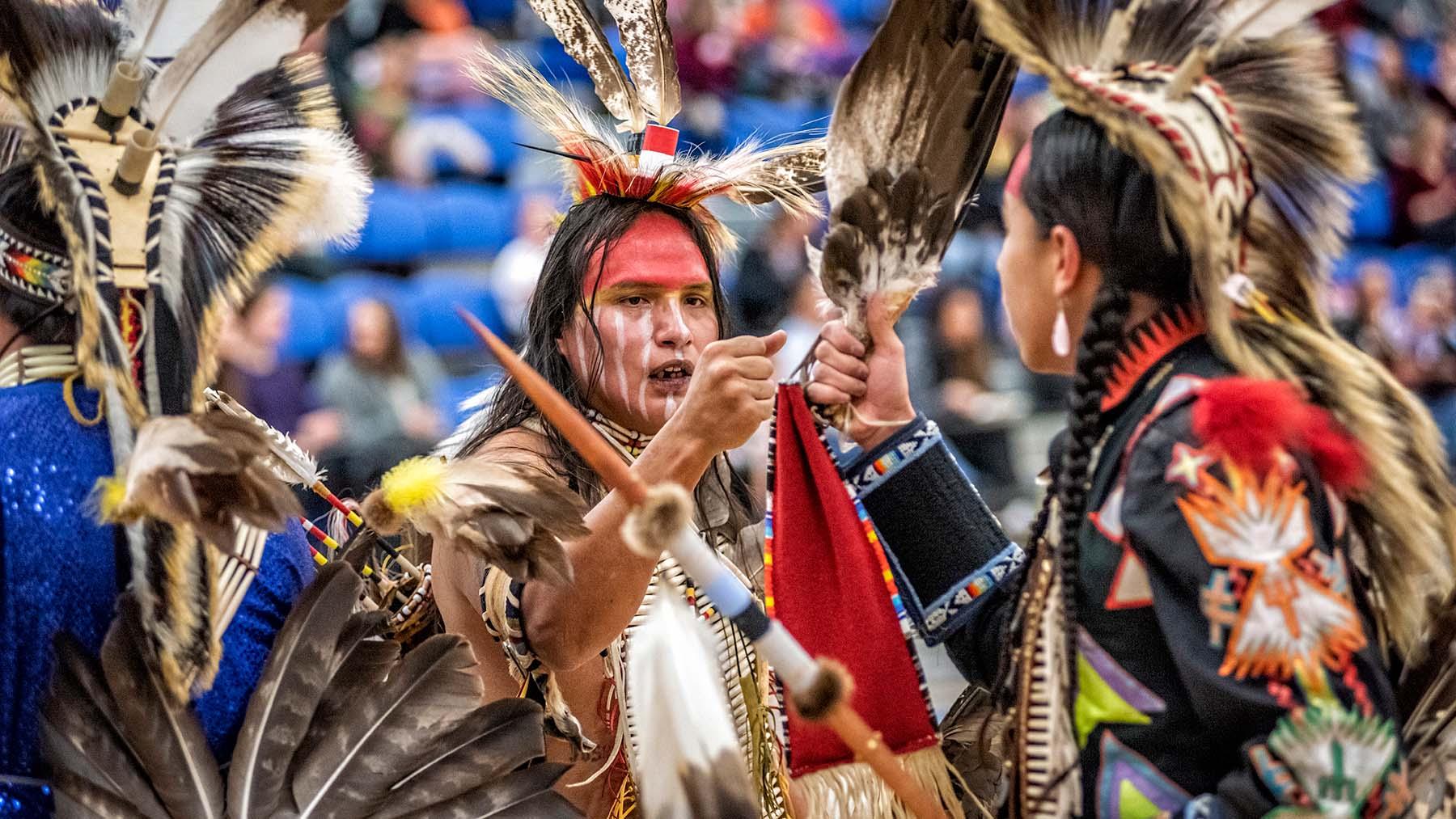 BISMARCK, ND — The University of Mary, in partnership with United Tribes Technical College (UTTC), is inviting the public and media to the second annual Mid-winter Powwow on campus. The event brings cultures together and helps celebrate the life and dignity of the human person. The Mid-winter Powwow was an annual event at the university in the 1980s and 90s and was revitalized in 2020, after a 30-year hiatus.

“We extend a joyful welcome and our Benedictine hospitality to our partners at UTTC, our good friends at BSC, and everyone participating in this beautiful and colorful annual event of dance, singing, and fellowship, which serves to affirm the culture and dignity of all peoples,” said University of Mary President Monsignor James P. Shea.

“Monsignor Shea and the UMary team have done a great job of bringing back the UMary Mid-Winter Powwow,” stated UTTC President Dr. Leander McDonald. “The UTTC team has appreciated the opportunity to provide input on this important Native cultural event for our campuses as well as the larger Bismarck Mandan metro area. I encourage anyone who has not been to a powwow to attend as the master of ceremonies Whitney ReCountre does a tremendous job of sharing the history and background for the dances and singing that occurs.”

The event Sunday, January 16, begins with a 10:30 a.m. Mass celebrated in honor of a holy man and “Servant of God,” Nicholas Black Elk — regarded as a historically notable and influential Native American leader who died in 1950. As a member of the Oglala Lakota peoples, Black Elk was a participant in the Battle of Little Bighorn as a boy, and present during the Wounded Knee Massacre. He later converted to Catholicism, and led a humble life as a catechist in service to spreading the Gospel. In 2016, the Diocese of Rapid City officially opened his cause for canonization as a saint.

Following Mass, the celebration continues with an introduction to the Powwow — "Powwow 101" — in Lumen Vitae University Center’s (LVUC) Founders Hall at 11:30 a.m. The Mid-winter Powwow commences with a grand entrance at 1 p.m. in the McDowell Activity Center (MAC), with a second grand entrance at 7 p.m.  Prizes for various categories of dance will be awarded. Attendees are invited to a traditional frybread and buffalo feed between 5 p.m. and 7 p.m. in LVUC’s Crow’s Nest Restaurant.

Entry fee for those five to 65 years of age is $5 per person, which includes the meal at the Crow’s Nest Restaurant.

For more information about the Mid-Winter Powwow, visit umary.edu/powwow.

The Powwow marks the first day of the University of Mary’s new Week to Celebrate the Life and Dignity of the Human Person, “Life and Dignity Week.” The week continues Monday with the celebration of Martin Luther King Day. The University of Mary is honoring the civil rights leader’s famous speech with an “I Have a Dream” art contest for students, sponsored by the Black Student Union. A special convocation and a celebratory dinner will also mark MLK Day. The week continues with a Community Learning Day on Wednesday with discussion of various social topics through the lens of Catholic social teaching. Life and Dignity Week culminates with the national March for Life in Washington, D.C., on Friday, January 21. Nearly 250 University of Mary students will board five buses to make the 60-hour round trip for that highly anticipated annual event. Also, that day, the public is invited to take part in the second annual statewide March for Life event that begins with Mass at 10:30 a.m. celebrated by Bishop David Kagan at the Cathedral of the Holy Spirit, followed by the march to the steps of the North Dakota Capitol for the rally at 12:30 p.m.