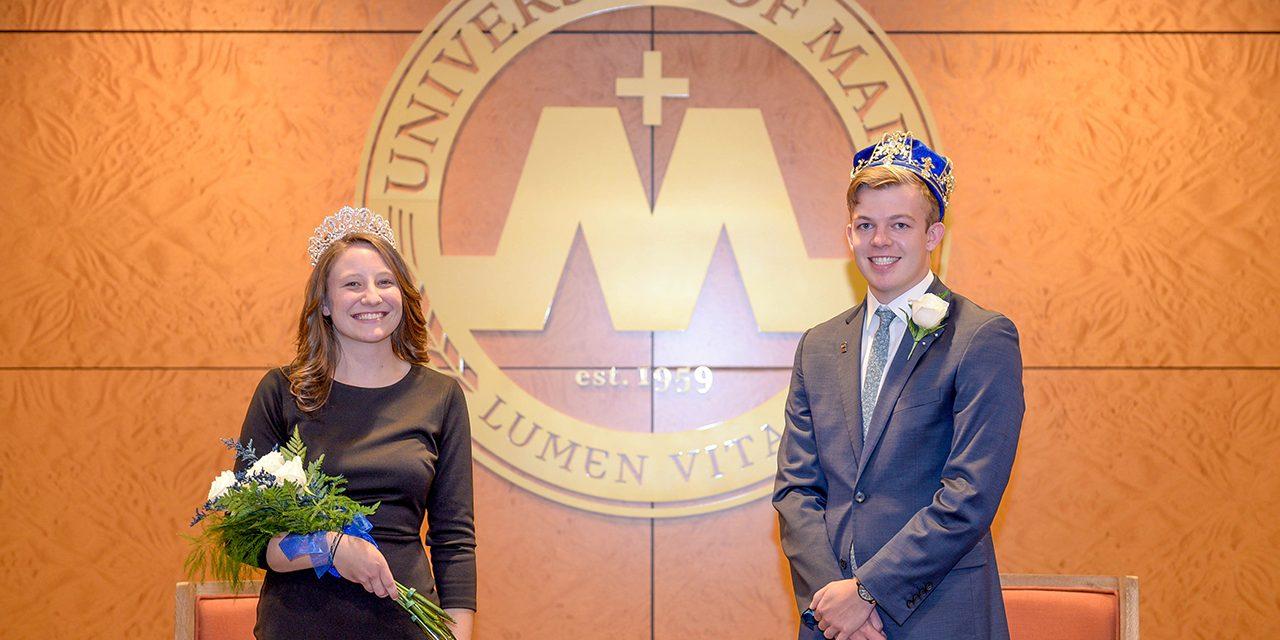 BISMARCK, ND — The University of Mary has announced the selection of its 2020 Homecoming King and Queen and their court.

Homecoming Queen is Carolyn Dinkel. Dinkel of Long Prairie, Minnesota, is a communication and Catholic studies major and the daughter of Charlie and Linda Dinkle. About being a student at the University of Mary, she said, “The professors genuinely want to know their students and watch them succeed in life. They’re here to listen to your struggles and help you through them so that college becomes not just a checklist of things to get done so you can move on in life, but a place to thrive and grow into the person you want to be. One of my greatest accomplishments is my Chaco tan line that I got working at camp this summer.” Dinkel has on her bucket list to go visit all of the National Parks at least once in her lifetime.

Homecoming King is Brock Vance. Vance, of Faith, South Dakota, is a business administration and marketing major and the son of Scott and Toni Vance. “My favorite thing as a student is the community that we have here at the University of Mary. Everyone knows everyone and we all are looking out for one another. It is nearly impossible to step foot into the Crow’s Nest without someone waving you down to say hello,” said Brock. Among his greatest accomplishments is only having to take elementary statistics twice. He has on his bucket list to go bird hunting with Dr. Echelbarger and for him to say “call me David.”

Other student nominees for king and queen included:

Katie Hauser, a financial services and banking major from Yankton, South Dakota, is the daughter of Kurt and Carrie Hauser. Hauser’s favorite part about being a student at the University of Mary is being seen. “Here at the University of Mary, both professors and other students take the time to get to know one another. No one is afraid to sit down and strike up a conversation with someone new. I absolutely love this aspect of campus,” Katie says. One of her greatest accomplishments was finishing her math minor. She said, “ I still have no clue why I decided to stick with it, but at the time when I was a naive sophomore I thought taking three more upper-level math courses wouldn’t be that bad. Let me clue you in: it was extremely difficult and I owe my passing grades to my fellow engineering classmates who stayed up with me until 2 AM studying the night before each test.” Hauser has on her bucket list to buy a boat by the time she is 25.

Miranda Sharp, a philosophy and theology major from Savage, Minnesota, is the daughter of Carter and Julie Sharp. “Something I like about being a student at the University of Mary is that you are known. It is a great place to build a community of not only other students, but also professors and staff. I love walking to class and actually knowing the people I walk by and being able to greet them every day. It’s such a pleasure getting to grow with my community not only in my classes but getting to grow with them through life as a better person,” she said. “I am very proud of the fact that I have gotten this far in college and have been able to make a great experience out of my time at the University of Mary. The friends and relationships I have made at the University of Mary are also one of my greatest accomplishments.”

Maura Stevenson, of Woodbury, Minnesota, is majoring in business administration with a minor in public relations. She is the daughter of Michael and Patricia Stevenson. She said of being a student at the University of Mary, “I love the continuous encounters and experiences I get to have with the tremendous students, faculty, and staff at the University of Mary. Whether it be a sports event, mass, or going to the Crow’s Nest, they all are a true witness to the comradeship of our love for this campus and all the memories we have had and continue to take part in every day. I love being able to be a Marauder now and always.” One of her greatest accomplishments was being able to receive the Saint Gianna Beretta Molla relic on behalf of the University of Mary with the women of Roer’s Hall her freshman year. She said, “This experience was an absolute honor, and great grace in discerning my vocation of marriage, which is such a gift now preparing to marry my best friend and fiancé, Mason Dreger.” Stevenson has on her bucket list to go skydiving above Greece.

Neil Francis Albana, Houston, Texas, is majoring in theology with a minor in new evangelization. He is the son of Francis and Rowena Albania. Albana loves being a student at the University of Mary because of the presence of faith and community. One of his greatest accomplishments is the two years he served with NET (National Evangelization Teams) Ministries. “This shaped the rest of my life and gave me the formation and the courage to pursue the vocation that I have in my life,” he said. His funniest memory so far: “Last year, watching Nacho Libre with a big group of people cramped in one apartment.” Albana has on his bucket list to be fluent in Spanish.

Dalton Houska of Dell Rapids, South Dakota, is the son of Dave and Sue Houska and majors in theology. Houska loves being a student at the University of Mary because of the community. “What we have is special and extremely hard to find outside of this campus. People here care deeply for one another and go directly for the heart when pursuing friendships. This is not a campus for superficiality. It is a place for genuine growth and authentic love between true friends,” he said. Among his greatest accomplishments, he said, “My freshman year I was at the University of South Dakota. My roommate in the second semester didn’t have a life of faith and he wasn’t baptized. By the end of our year of study and discussion, he was fully committed to a life in Christ and was on the road towards baptism. I do not consider this to be my accomplishment alone, but rather the fruit of a friendship pursuing the Truth.” Houska has on his bucket list to give the Pope a high-five.

John Brickweg, of Burnsville, Minnesota, is a communications major in media and production and the son of Bob and Christine Brickweg. “I love being a student at the University of Mary because of the relationships – whether it be my classmates, professors, or the university staff,” he says. One of his greatest accomplishments was when he won his BAC basketball championship in the 1st grade. Brickweg has his bucket list to go abroad to Europe.