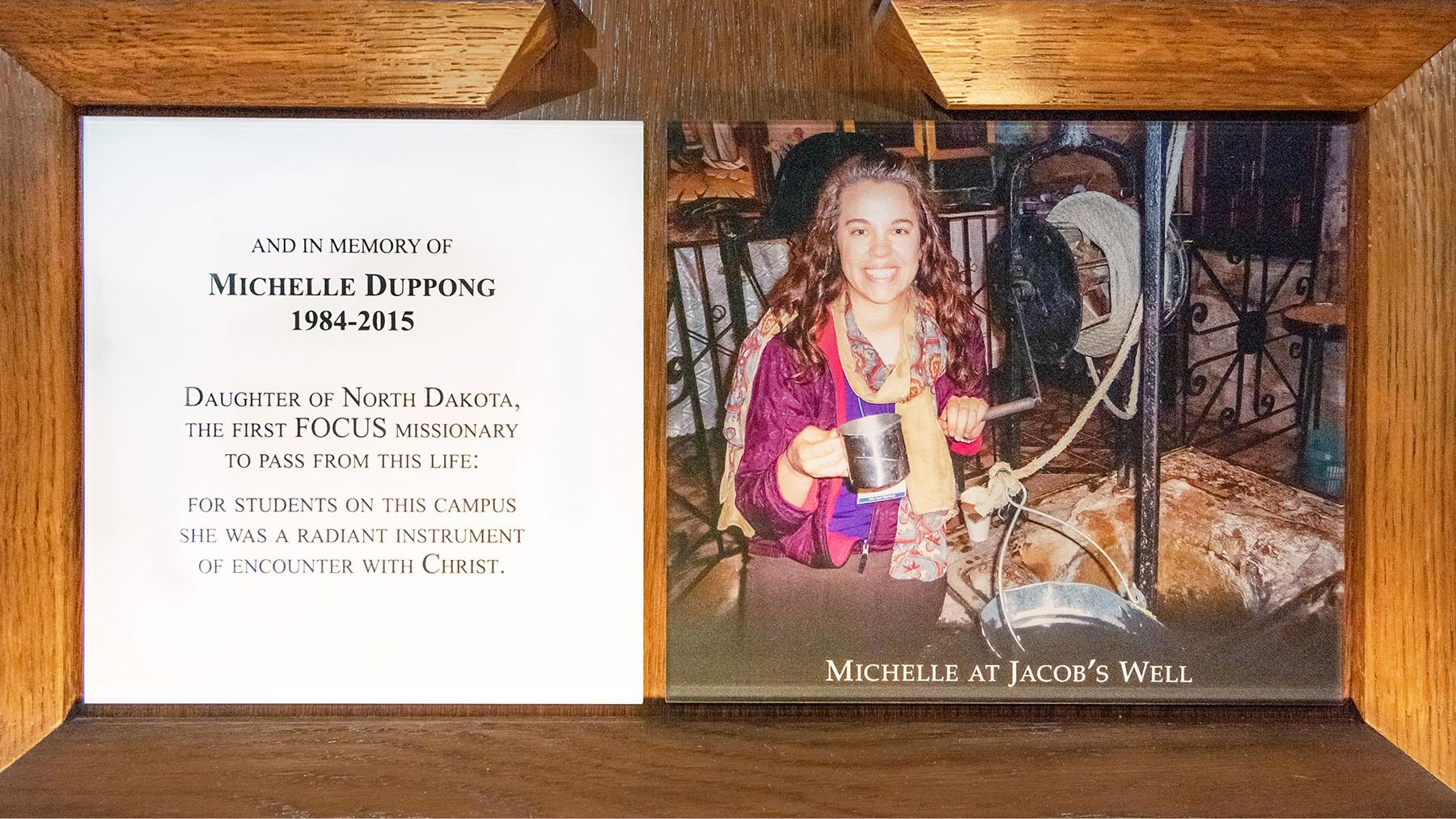 Native of North Dakota, Duppong served at the University of Mary as a FOCUS Missionary

DENVER, June 16, 2022 — Bishop David Kagan, Diocese of Bismarck, N.D., announced the opening of the diocesan investigation which could lead to the beatification and canonization of North Dakota native Michelle Christine Duppong. At the age of 31, Duppong passed away from cancer on December 25, 2015, while serving as the Director of Adult Faith Formation for the Diocese of Bismarck. Before that, Duppong had served as a FOCUS missionary for six years.

Born in 1985, Duppong grew up in Haymarsh, N.D. She earned a degree in horticulture at North Dakota State University in 2006. While there, she encountered FOCUS (Fellowship of Catholic University Students) and was so inspired by the apostolate that after graduation she served as a FOCUS missionary. For six years, Duppong mentored hundreds of students at the college campuses, with her final assignment on the inaugural FOCUS team at the University of Mary.

In 2012, Duppong became the Director of Adult Faith Formation for the Diocese of Bismarck, using her missionary zeal to bring others closer to Christ. On Dec. 29, 2014, Duppong was unexpectedly diagnosed with cancer and battled the disease with perseverance and a patient, cheerful spirit, passing from this life on December 25, 2015.

“Michelle was a radiant, joyful woman with the heart of a true servant,” said Monsignor James Shea, president of the University of Mary. “For the students on our campus, she was an inspiration and a treasured mentor, teaching them by her example the transformative power of friendship with God.”

The diocesan investigation, which involves the gathering of evidence about Michelle’s life and deeds, will include witness testimonies and the compilation of private and public writings. When this is completed, the next stage towards the Cause for Beatification and Canonization is for the evidence to be presented by the diocese to the Congregation for the Causes of Saints at the Vatican. If the documentation is accepted for consideration, Michelle would then be considered a “servant of God.” From there, the cause could proceed at a steady pace, especially if there are no theological objections and Duppong enjoys what the Church calls “the fame of sanctity” — that she is venerated as a holy person — and there are one or more miracles attributed to her intercession.

A documentary entitled Thirst for Souls: the Michelle Duppong Story is in the works, set for its worldwide premiere at SEEK23, FOCUS’ national conference, being held January 2-6, 2023 in St. Louis, Mo.

Anyone who wishes to learn more about undergraduate programs at Mary can do so at www.umary.edu, or online offerings at www.online.umary.edu, by contacting an admissions representative at enroll@umary.edu, or by calling (701) 355-8030. The University of Mary is one of only 15 Recommended Cardinal Newman Society Residential Colleges and Universities in the US.

About FOCUS: FOCUS (Fellowship of Catholic University Students) is a Catholic apostolate whose mission is to share the hope and joy of the Gospel. FOCUS missionaries encounter people in friendship, inviting them into a personal relationship with Christ and accompanying them as they pursue lives of virtue and excellence. Through Bible studies, outreach events, mission trips and discipleship, missionaries inspire and build up others in the faith, sending them out to live out lifelong Catholic mission wherever they are. For the 2021 – 2022 academic year, nearly 800 FOCUS missionaries are serving at 205 locations, which includes 22 parish venues across the U.S. and seven international campuses. FOCUS alumni, now nearly 40,000 strong, are living and serving in parishes and communities across the country. By 2026, FOCUS expects to have more than 70,000 alumni. An important blessing of a fruitful partnership between the local campus ministry and FOCUS has been the pursuit of religious vocations. Since 1998, more than 1,000 people have entered the seminary or a religious house of formation after involvement with FOCUS on college campuses. FOCUS expects to nearly double that number in the next five years. FOCUS missionaries are typically recent college graduates who devote two or more years of their post-collegiate lives to reach out to peers on campus. focus.org